About knitting and crochet pattern designer, SweaterBabe, aka Katherine Lee 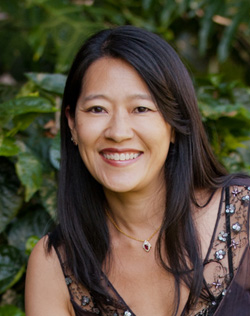 Katherine is the designer behind all the Sweaterbabe.com knitting and crochet patterns.

Katherine first learned to knit at a day care center in Iowa when she was just 8 years old! It was that or shrinky-dinks (remember those?) and the knitting needles won out that fateful afternoon. Her first project was a never-ending (they didn't teach her how to bind off) scarf-like object in a lovely orange-variegated, acrylic yarn from Target. It would be the first of many cherished projects.

Soon after, Katherine moved to San Diego with her family, where she continued to knit obsessively, teaching herself new knitting techniques and patterns, as well as how to crochet and tat (an old lace-making technique). Even as she went to engineering school, became a consultant for a BIG accounting firm, and later got her MBA, she often daydreamed of turning her favorite hobby into a career (even pursuing an MFA in Knitwear Design at the Academy of Art school in San Francisco at one point!). Instead, she stayed on her conservative career path and became a veteran of several Internet start-ups, moved to Los Angeles, and continued to pursue her passion for knitting, crocheting, and designing in her spare time.

Over the years, she designed and knit and crocheted hundreds of sweaters, scarves, purses, and shawls (even toilet roll and seat covers for her relatives!) as gifts or for her personal collection. She even knit her own wedding dress! A local gown maker in LA worked with her to design the silk A-line, strapless dress and allowed her to knit and bead the lace that decorated the bodice and train. Katherine also knit a matching silk shawl, putting on the last beads just nights before the wedding.

Finally, with the encouragement of friends and family who have long admired her knitting and crochet talent (as well as her 3 hand-looms and her breath-taking stash of fabulous yarns and knitting and crochet books!), she took the career leap from Internet executive to Knitwear and Crochet Designer and Instructor.

Katherine taught hundreds of students in Los Angeles at some of the local yarn stores and at her home studio (Knitting Basics I was her most popular class!). She also taught private 1-on-1 and group classes for a few years. Her students were amazed at her patience! And with her 25+ years of knitting and crocheting experience, she was able to share a wealth of tips and information.

She did a guest appearance on the new DIY show "Uncommon Threads" which first aired in the summer of 2006. In the episode, called "The Crochet Class", Katherine teaches 3 knitters how to crochet by stepping them through an easy crochet shawl.

Katherine has also done free-lance designs for yarn companies and designers (including a bikini company!) in Los Angeles, though her main focus now is designing and publishing her SweaterBabe.com line of original knitting and crochet patterns.

She has published patterns in several Vogue Knitting on the Go! books, several Lark books and, in her own book, SweaterBabe.com's Fabulous & Flirty Crochet, which featured 20 gorgeous crochet sweaters and accessories.